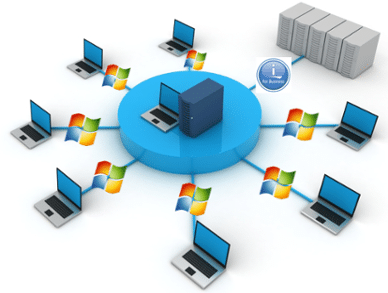 For CIOs who may not be familiar with the IBM i environment, it helps to understand how you can leverage an IBM i system in a Microsoft Windows network.

IBM i partitions can run most TCP/IP servers alongside production software. Many packages, including DRV’s full-line of solutions, can run IBM i and TCP/IP servers on the same partition, rather than using Windows servers for standard TCP/IP functions.

Here’s how IBM’s native TCP/IP capabilities provide options in a Windows network to reduce traffic, use your IBM i as a Microsoft file server, and avoid additional Windows server costs.

Like a Windows server running VMWare, you can create multiple IBM I, AIX, and Linux partitions on an IBM Power server box.

Because of the IBM I multi-application architecture, you have more options for exchanging information using TCP/IP in a Windows network. You can use Windows TCP/IP servers or native TCP/IP IBM i servers, and you can use whichever server best meets your needs.

Here are some ways IBM i TCP/IP services can help you move information in a Windows network.

Using applications such as DRVTech’s report automation and document management software, you can save IBM i application output in universal file formats such as PDF and XLSX. These files can be directly written to a Microsoft file server using QNTC, the IBM i Server Message Block (SMB) client.

You can also save application output to the IBM i Integrated File System (IFS), which has the ability to store stream files and make them available through a Windows file share. Once stored to the IFS, your Windows users can access those files by mapping a drive to the IFS through their Windows desktop Computer folder.

For more information on using the IFS as a Windows file share, see my earlier post on sending IBM i report data directly to Windows servers and to your users.

Reducing Traffic on Your Exchange Servers

And There are More Options

SMTP and SMB aren’t the only TCP/IP options you have available on an IBM i. You can leverage your IBM i systems to natively run most TCP/IP services, including:

The Choice is Yours

My purpose here isn’t to recommend running all your native TCP/IP servers on IBM i. If it meets your business needs for configuring IBM i software from DRVTech or other vendors, you can run TCP/IP functions on either an IBM i or on a Windows server.

IBM Power systems running IBM i partitions give you more options to leverage both your IBM i and your Windows servers by: reducing network traffic, reducing your Windows licensing charges and the number of Windows servers, and using your IBM IFS as a Windows file server. Don’t forget your free eguide by clicking the button below, as well as the helpful articles we’ve included for your viewing.

More articles on IBM i concepts and the Windows world

IBM i Software Pricing for Non-IBM i Managers

Translating IBM i for the Windows World